The European Space Agency has for about a decade researched the concept of a "hyper telescope," under the name Exo Earth Imager. EEI would be a fleet of 150 orbital 3-meter mirrors, spread across about 8,000 square kilometers of space, and synchronized to reflect and magnify the image of an earth-sized planet in orbit around a distant star, with high enough resolution to discern oceans, continents, forests, deserts and even major river basins. Maintaining the mirrors in their relative orbits with the level of precision needed would be challenging at least. Not insurmountably so, but certainly not trivial.

A possible solution for this is to instead mount the mirrors on a fixed surface. There have already been proposals for building large telescopes on the far side of the moon, shielded from terrestrial radio interference. NASA has even demonstrated that large astronomy-grade mirrors can be constructed in-situ from lunar regolith. A telescope of this scale would have many applications and purposes besides viewing exoplanets, but this would be its primary purpose.

I would like to propose that instead of the lunar far-side, a better location for an optical (and maybe radio as well) telescope would be inside the basin of Peary crater. I've discussed the unique properties of Peary in this blog previously, in the context of human colonization. But briefly, Peary crater, by virtue of being situated on the north pole, has the triple virtue of a basin which is constantly in darkness and protected from solar radiation, a rim that is in constant sunlight for solar power, and a substantial amount of water ice on the floor of the basin. Shackleton crater on the lunar south pole is similar in many respects, and would similarly be an excellent site for this; however Peary is about 80 km in diameter and Shackleton is only about 20 km, so Peary would afford space for a much larger telescope. 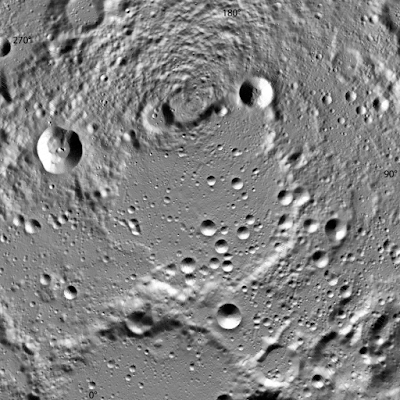 And yes, a small astronomical observation outpost and research facility could provide the seed of a human colony in Peary crater as well. In later posts we'll be discussing the advantages of establishing a lunar colony over either Mars, Venus or orbital stations; a moon-based space telescope (at whatever location) could be a very good beginning to a robust lunar city. 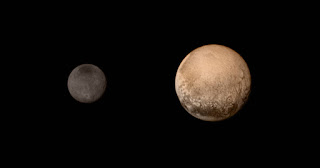 Some of us have been waiting a really long time for the New Horizons flyby of Pluto (it launched almost a decade ago). However, what we are going to see today is basically NOTHING, other than an endless string of NASA press conferences about how they don't have anything to tell or show us.

New Horizons must first be aimed at Pluto (and it's companion planet Charon; apparently NASA has officially stopped calling it a "moon") in order to get photographs and other data during the flyby. Closest point of approach to Pluto will be at 4:49am pdt, but it will continue photographing and collecting data on Pluto for at least several hours after the flyby. Then New Horizons will realign itself to aim its antenna back toward earth. It will first send a short ping to tell the mission team that the spacecraft made it through the Pluto system without mishap, and that the data was collected and is safely in NH's memory banks. This ping will take about four and a half hours to travel from Pluto back to Earth at the speed of light.

Then New Horizons will begin transmitting its preliminary data package. These will include low resolution (about the quality of a JPEG) images of Pluto and Charon during the flyby. Due to the highly attenuated signal crossing some three billion kilometers of interplanetary space, the baud rate of the transmissions will be maddeningly slow. Once received on earth they must be processed and analyzed. 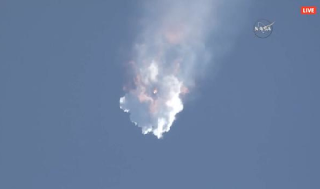 There's a lot going on right now in the realm of space exploration. The Dawn mission to Ceres is getting very interesting, the New Horizons mission will reach Pluto and Charon in two weeks; this is all huge, and I haven't posted anything here at all about any of it for a couple of months, due mostly to simple writer's block. Sad about that, and hoping to do better.

So, this morning the SpaceX CRS-7 Dragon/Falcon 9 cargo mission to the International Space Station failed. Notably it was the third failure of a cargo vessel to the ISS in the past eight months, after the Orbital ATK Antares back in October and the Russian Progress 59 in April. In the scheme of such things, this really is not a big deal. The ISS crew have enough provisions until October, and there's another Progress flight scheduled for this Friday. Nobody was hurt, and out of nineteen total Falcon 9 launches since 2010, one catastrophic failure is right at the 5% failure rate which is the rough median for orbital launches.

So, why does this feel like such a monumental blow to the commercial space program, and to spaceflight in general? Rockets explode, it's one of the things they do. When the Antares exploded, spectacularly, last fall, it made the news of course, and people speculated about whether or not Orbital would survive. But nobody speculated about whether or not spaceflight itself would survive. That would have been crazy. But today I've seen that speculation in the media, in chat rooms and other online forums, in all kinds of places that are populated by people who actually understand spaceflight. In the NASA press briefing this morning you could feel that current as well, even though they did a very good job of presenting the rational analysis of this being just another rocket explosion. You could even see it in Charlie Bolden's demeanor this morning. I felt it too.

For several years now there has grown an idea that the brilliant Elon Musk was doing what no other entity had ever been able to do before. That the founder of Pay Pal was somehow smarter than all of the engineers at NASA, Roscosmos, ESA, Boeing or Lockheed, and had figured out how to make spaceflight safe and affordable when all of the others had failed. With each successful Falcon 9 flight this became easier to believe, largely because we really wanted to believe it. Even Musk's competitors watched him to see if they could emulate his success.

Underlying this was sometimes a sense that SpaceX didn't know what they didn't know, and that through trial and error they would eventually come to look more like Boeing, Lockheed and other "old space" companies. But, we wanted this to not be true. We wanted spaceflight to be as easy, safe and affordable as Musk believed it to be.

Today we learned that Tsiolkovsky doesn't play favorites. And in many ways, today SpaceX finally became a real, grown-up rocket company. And we who follow spaceflight have had to grow up a bit as well.

This is HAVOC, NASA's new proposal for utilizing lighter than air craft to explore and colonize Venus. This is an enormous paradigm shift for them. For years the common wisdom has been that Venus was utterly uninhabitable, with surface atmospheric pressures 92 times that of earth (about the equivalent of one kilometer under water on earth), and surface temperatures above 500° C. But of course, if we were to explore an earth-analog planet with oceans like ours, we would probably not begin exploring that at one kilometer down, either. By the simple physics of adiabatic lapse rate (the higher you go in the atmosphere, the colder and less dense it becomes), at some altitude above the surface of Venus the atmosphere is of terrestrial densities and temperatures. There are issues; sulfuric acid, for example, falls as rain there. But life support in this environment would be trivial compared to the Martian surface.

The transit times for a mission to the atmosphere of Venus and back to earth are much, much less than for trip to and from the surface of Mars. The Delta V budget to the Venusian atmosphere is higher than a landing on Mars (25 km/sec vs 19 km/sec), but this penalty may well be outweighed by the smaller amount of hardware needed to survive above Venus. This has very, very serious potential to be the first human exploration and colonization of another planet.

Posted by Captain Robert Reeder at 9:42 PM No comments: 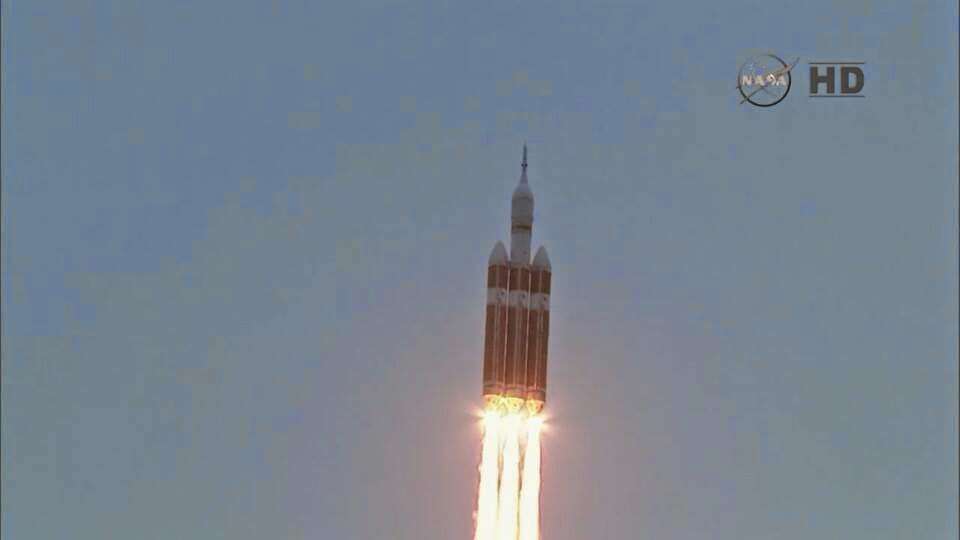 And, a huge shout-out to United Launch Alliance as well.
Posted by Captain Robert Reeder at 10:53 PM 1 comment: 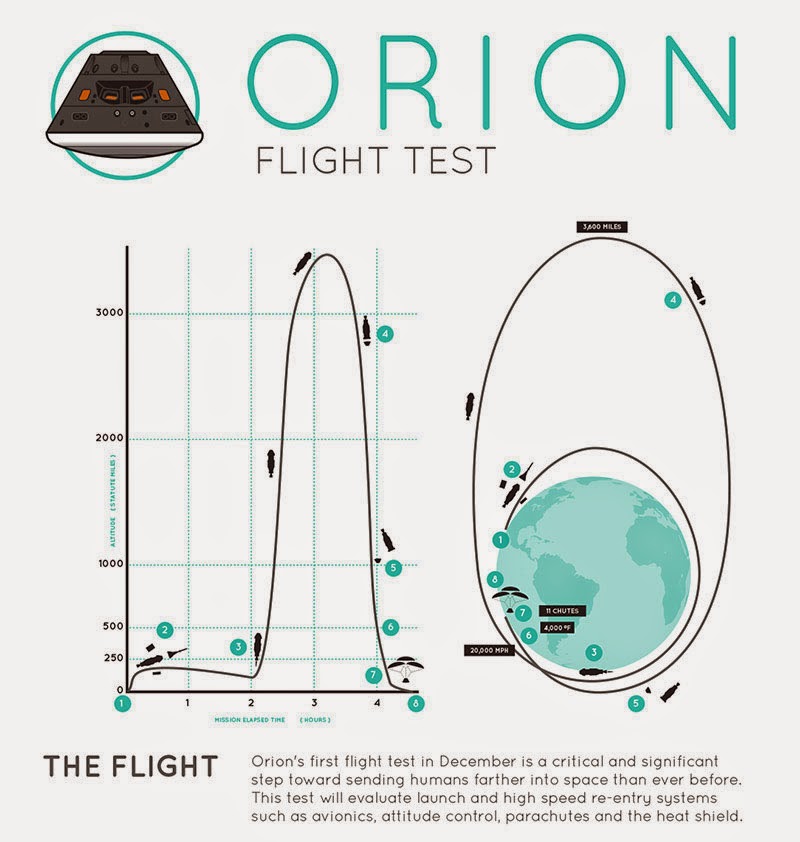 Posted by Captain Robert Reeder at 10:14 PM No comments: 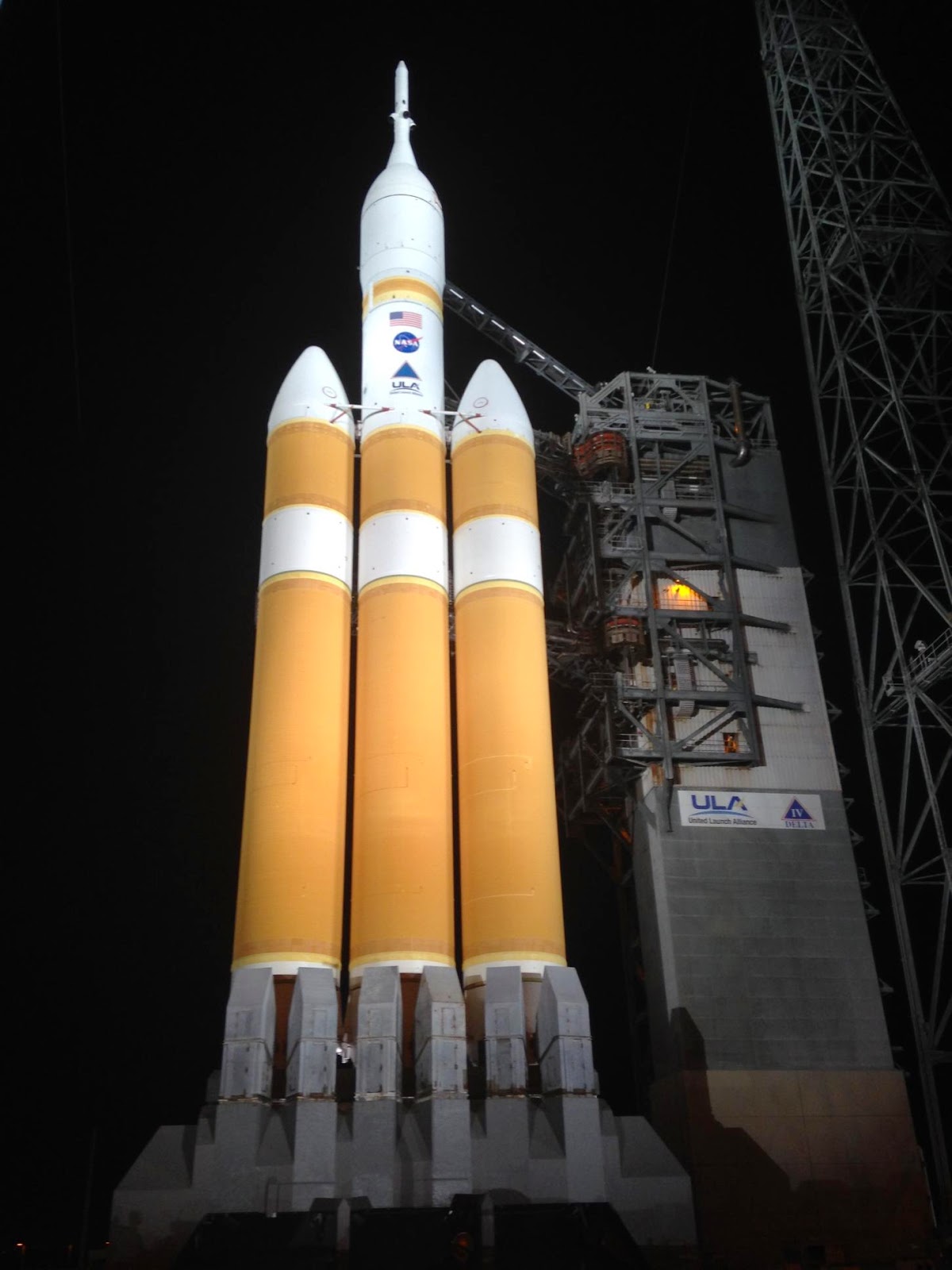 Posted by Captain Robert Reeder at 10:12 PM No comments: